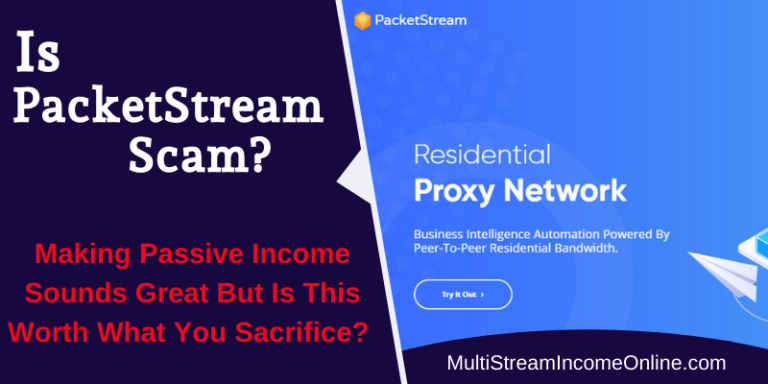 Being pitched with earn passive income just by sharing your unused internet bandwidth with a proxy network sounds convincing especially when you don’t have to do anything. PacketStream preaches you this offer. So my guess is that you’ve chanced on PacketStream and wondering whether it’s legit or a scam?

Apparently, similar sites like Fluidstack, Honeygain and Packity pay you to share your unused bandwidth in exchange for money but does it make PacketStream a legit platform to open your gateway to? Well, that’s what I’ve gathered from my testing and trials to help you with.

Revealed in this review…….

Let’s cut to the chase then.

Summary: PacketStream is a peer-to-peer proxy network that brings internet bandwidth sharers and users into one place using their automation tools. While the internet users(customers) pay to use the internet, the bandwidth providers get paid for their contribution.

In their own words, “PacketStream is the first of its kind peer-to-peer proxy network. Packeters are compensated for sharing bandwidth on the PacketStream network and allowing users all over the world to have access to content on the internet through our secure network. Customers can purchase bandwidth and browse the web from residential IPs to protect their browsing privacy.”

In a simple language, you can put it as an intermediary platform with a technology that allows you to share your internet bandwidth as a provider (Packeter) through a network where they sell it to customers (users of your bandwidth) and in return reward you a percentage.

So in effect, in the absence of internet bandwidth providers as well as customers, there will be no PacketStream business.

How Exactly Does PacketStream Work?

According to their website, “PacketStream works because of you!“ which is to mean if Packeters don’t contribute internet bandwidth into their network, customers can’t get access to the content they want and vice versa.

As an intermediary network, it sells bandwidth to customers who want to browse the internet without using their personal information. Unlike VPN or proxy network service, they make it plausible to use a residential proxy of someone in another location to access content on the internet.

So as a Packeter, PacketStream routes their customers’ traffic via your residential proxy to make it look as if you’re the one browsing. It’s like someone using your bandwidth to browse the internet in a different location.

So while customers pay PacketStream for helping them use your bandwidth, you’re given a cut for allowing your internet details to be used. This sounds like a nice way to make money just plugging to their node but it could be risky since you’re not sure of the kind of places users of your bandwidth surf the internet.

How Do You Make Money with PacketStream?

There are two main ways to make money with PacketStream platform;

A Packeter is an individual who joins PacketStream residential proxy network through a node to share his or her internet bandwidth in exchange for money. According to them, you earn $0.1 per GB bandwidth you contribute to their network.

You might be tempted to say that this really adds up with time but in my experience with honeygain, I can confidently tell you that you have a long way to go if you’re going by this train. You’re allowed to connect more than one computer to their network to increase your earning but it wouldn’t make any difference if they’re all coming from the same network.

PacketStream encourages members to add to their network of Packeters and in return earn 3% of their earnings so long as they stay active on the network. When you sign up as Packeter, you’re given a code referred to as a referral link that you can share with people to join.

This is by far a great way to earn significant income on the internet since my search for ways to make money online. In another context, it’s referred to as Affiliate Marketing which is my favourite way of making money online.

However, you need a good number of people to make something significant on PacketStream. If you have a huge social media followers who are also interested in making money by sharing their bandwidth, then the easy way will be sharing your referral link with them.

How Much Money Can You Earn With PacketStream?

With these two main options of earning, you can earn as much as the amount of bandwidth you contribute to their network and the number of people you refer to their platform. According to PacketStream, the minimum threshold of withdrawal is $5 which is lower compared to honeygain.

It appears easy to earn but let see how long it will take you. $0.1/GB implies that you require 50GB in order to make the $5. That’s a huge data for just $5. Participating in offers of Respondent could earn you significant income for one study.

Assuming you share 1GB bandwidth daily which is rare, it implies that it will take you like 2 months just to make $5 which you can easily earn that on Fluidstack. To reach this minimum threshold on PacketStream within a short time, it appears like having referrals is the way to go.

It means you need to have 100’s of referrals since the 3% is just a tiny fraction of the cents that they will be making.

How Does PacketStream Pays You?

PacketStream pays Packeters through Paypal…….that’s the only payment option. After struggling to earn the $5, you’re charged a fee of 3% during your cashout. This is very discouraging, however, I haven’t encountered that with Fluidstack.

Is It Safe To Join PacketStream?

Well, according to PacketStream, “Our product engineers use industry-established encryption and security practices to keep Packeter & customer data safe and secure”. That is from them but you can’t actually have a 100% guarantee that you wouldn’t face any issue being connected to their network.

Their website has an SSL certificate which gives some level of protection but sharing your residential bandwidth with someone to use for purposes you can’t track yourself is something to have a second thought before plugging your computer to their network.

What Users Are Saying About PacketStream

No matter how nice it sounds to the ear – make passive income with your idle computer just sharing your unused bandwidth, the amount you earn per GB data is very low. Of course, it adds up but for how long would it take for you to make the $5 minimum?

Someone operated it for more than a month and he couldn’t even bring $0.4 to the table. That’s very low. At least I know that Fluidstack can make you up to $600 a month provided you have the right resources. One might argue that you don’t’ have to do anything but hey, you’ve got to keep your computer on to earn these cents….it comes with a cost like power.

You would want to check out this recommendation if you so desire to make something significant with your internet. Also, considering how much a GB bandwidth is sold to customers on the PacketStream website, I will say earning $0.1/GB is not a good deal.

Your Security Appears Not To Be PacketStream’s Priority

PacketStream clearly states on their website that your security is ensured on their network but it appears that it doesn’t carry any weight. Some Packeters have gotten their accounts on other platforms banned because customers of PacketStream did something fishy.

From a thread shared on Reddit, the response conveys a careless service from their end…so far as customers pay them the money, they don’t really care much about where and how they use the bandwidth. It looks like there are no proper restrictions to put customers in check. If you don’t want that experience then Respondent, honeygain and LoadTeam should be a far better option for you.

Is PacketStream Scam or Legit?

PacketStream is not a scam website. Several people have received payments although there are few cases of disappointments. While that must be encouraging, you may want to take note of the following before socketing to their node.

You may not reach the minimum threshold every month if you’re from a 2nd/3rd class world. Since it’s a proxy network, most customers would like to use proxies from advanced countries. So, where you’re located can significantly influence the amount you earn in a month.

Also, you might be convinced that it takes only turning your computer on for the money to start rolling in but it’s far from the truth. Your earning is insignificant…it can’t even pay the amount of electricity your device will consume. Customers will find it more beneficial than Packeters because it cost $1/GB to use someone’s residential proxy network for business or whatever.

In addition to trading your bandwidth for cents to the platform, it’s going to cost you more in terms of your security and power since you have to turn your computer on 24/7. That could even cause overheating for laptops on continuous use.

PacketStream is young on the internet which implies they have a lot to prove that they’re indeed legit however, there isn’t much to hold against them as a scam website. I don’t recommend it either as a platform to cast your net wide for a passive income.

My analysis on the earning rate makes it clear that hardly would you earn $5 every month let alone hoping to earn a substantial passive income to support your life. A calculation revealed that for one to even make $10/h, you should have at least 1,323 active referral members which I doubt you’re willing to go on that path.

However, adding its alternatives like FluidStack, honeygain, LoadTeam and GetPaidTo can be a nice way to make good money every month. You may also want to consider this list of make money online with your idle computer for more options.

For your information, most people quit using PacketStream before reaching the minimum threshold so I don’t use PacketStream. So if you desire a better passive income option, then you may want to change your direction to what really makes significant income online – Affiliate Marketing.

I call it helping others online with what you know to get paid and there’s no limit to the amount you can earn. Yes, you heard me right. That’s what I do part-time online to make money even when I’m asleep and you can too. It takes only a DECISION to do something different.

Your decision now is either to click on my free ultimate guide below or give away your bandwidth. Either way, you will have results. The question is….would you look back someday to rejoice in making the right choice or regret not taking the right action?

The best part is, you get it for FREE. NO CREDIT CARD NEEDED! Click on the link below to get access NOW.

Oh heck, I almost forgot…feel free to share your story in the comment box below if you have any experience with PacketStream.

Sharing will help a fellow to make the right decision and if you have any questions too, drop it there and I’ll be glad to connect with you.

You’re Losing Income Streams Online If You Don’t Know These…….

4 thoughts on “Is PacketStream Scam OR Legit? You Must Be Safety Conscious!”