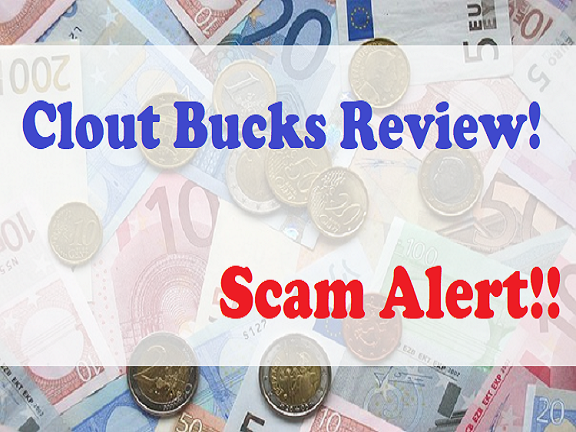 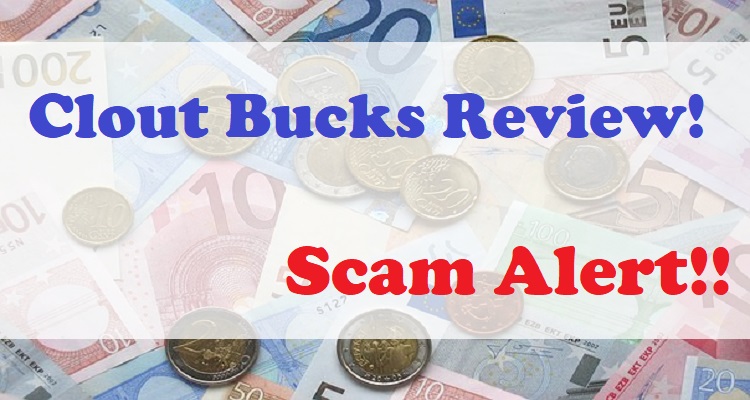 Welcome to my Clout Bucks review!

Wouldn’t that be the world’s financial solution in curing a lean purse if all that is required of you is just invite friends and get paid? Can you imagine a world like that with the internet? This is what Clout Bucks wants you to believe.

So if you’re here, my guess is that it sounds too good to be true in your ears. You want to know whether Clout Bucks is a real gem to fatten your wallet or a scam to forget in a blink of an eye? Let me congratulate you first for doing your personal research to save yourself precious time.

As the old adage goes; kill the snake by the head while it’s still young, I’m afraid to tell you upfront that Clout bucks isn’t worth your effort and I’ll show you in this review.

I’ve been at their tail for quite some time and have seen them flip domains to domains, changed interface to interface but with the same message that lures desperate people who genuinely want to make money online.

Let me walk you straight at it. Sit tight as I reveal what’s behind the curtains to you.

Make Money Doing What You Love. My #1 Recommendation!!

Platform Type: Get Paid To Invite

Best For: NO ONE

Clout Bucks is a free-to-join website that claims to make you hundreds of dollars with social media just inviting friends. You can also put it as get paid to invite platform that claims to reward you for the traffic you generate to their site.

According to them, you can make thousands of $$ in a week with social media just by sharing your referral link. They claim to reward you $10 for every referral you send to their site and they even credit you $25 to your account upon sign up. 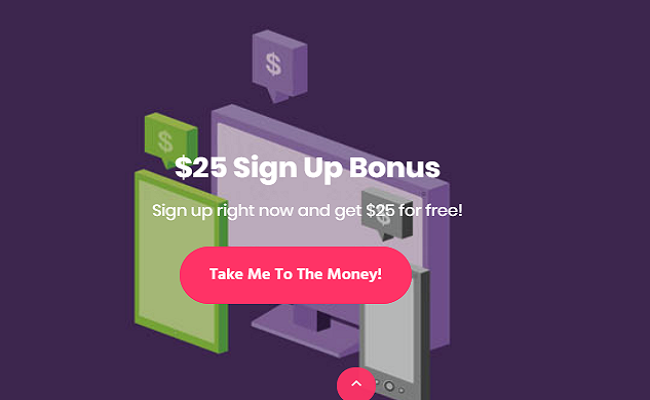 That alone is enough to fuel you into their delusion if you don’t know how making money on the internet works. In fact, that’s what they’ve specialised in doing.

They claim their capability to pay out that earning rates because they’ve been in business for 10 years. In addition, they have partners which enable them to increase members earnings through surveys and completion of tasks.

Apparently, Clout Bucks was registered late last month which is May 23 upon a check on whois.com and that’s contradictory. 10 years in the business claim which apparently is found to be less than a quarter-year-old is not just a small indication to expose their real intentions.

To bring you up to speed on its legitimacy status, let’s take it from how they work.

Literally, it’s simple to get started but hard to get payment. You first have to sign up providing basic personal information. You’re then given referral link exclusive to you to be shared on social media platforms and whatever outlets that can direct traffic to the site.

According to them, anyone that signs up through your link earns you $10 and every visitation earns you $2. You’ll see it credited to your account but that’s just the beginning of your woes.

Within the platform, you’ll find other offers like surveys which usually send you to a 3rd party sites. Some will ask of your details which is where you have to be careful. These links are suspected to be a pay per click (PPC) offers which make owners of Clout Bucks money any time you click on them.

So the more they get people to click, the higher their earnings. Apparently, some of these surveys can be joined freely through Google search without necessary going through Clout Bucks.

They’re leveraging their deceitful earning offers to make money at your expense. They claim you can withdraw through PayPal, CashApp, Western Union, Bank Transfer, mailed checks, and more. That’s a lie!

So the question is, why hide your identity if you intend to help people make money online? This implies that there’s no one to hold responsible if things go sideways and I don’t think you want to find yourself in that situation.

Not that I wouldn’t be happy to make $25 for sign up, $2 for every invite and $10 for every referral that creates an account but it’s far from the truth. They’re not that generous to dash you such amounts; they’re not a charity home but a profit-driven entity.

The question is how much do Amazon and Google pay for their ads – cents! If these great companies who have taken over the internet world wouldn’t be offering you such rates how much more a GPT website who has been in the system for barely half a year?

Do you think they care about you that much to the extent where they would increase the rate per invite from $0.1 to $10 as stated on their website? Heck no! The world’s biggest online store (Amazon) has even reduced affiliate commissions so think through it yourself.

As stated earlier, I’ve been monitoring this site for quite some time and it looks like what they’ve specialised in doing is flipping domain name from time to time. Hitherto, they existed as Dinero Facil Gratis, Kids Paid Money, Kids Get Money, Kids Earn Money and Kids Earn Cash.

You would see that they’ve only gone through interface change but the message they carry is the same. You, don’t just take my word for it; type kidsearncash.com into your browser and see where you’ll be redirected to.

Let me know what you find in the comment box below.

Of course, you would see the $25 credited to your account upon sign up. Your account will begin to fatten with the $2 and $10 increase rates while you spam social media with your referral link to drive traffic to their site.

However, all this effort will go down to the drain because it brings you to a dead end. The money will never hit your account when you request for payment. Sometimes, you’re redirected to a survey platform as a disguised formality to process your payment.

The truth is that you’ll be wasting your time. I’ve had a lot of people expressing their resentment on the previous ones for monies not paid. And Clout Bucks is no different.

Have you taken notice of the stats on their website? If you’ve not, peer over it down here;

The first thing I want to draw your attention to is the number of years in business – 10 years. You’ll be startled to know that their domain got registered on May 23, 2019, upon check up on whois.com. So on what planet did they exist for 10 years? 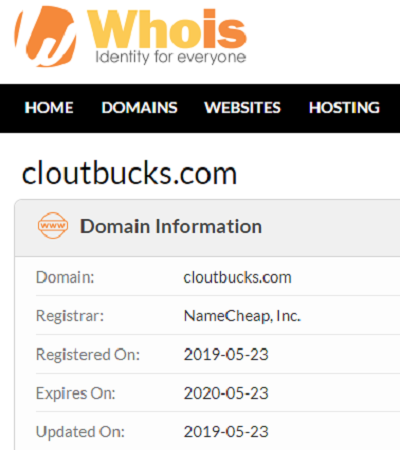 Are you surprised? Don’t be because there’s more to see behind the curtains. It also states that they have over 63,000 followers – for the where? I followed through on their social media pages and guess what. 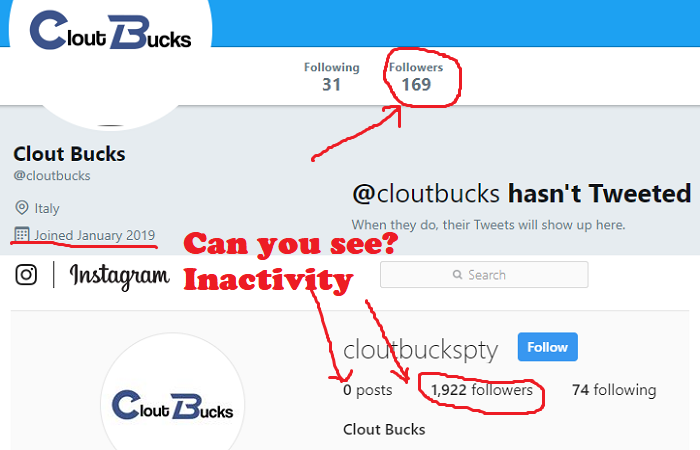 As you can see above, they have 169 followers on Twitter and 1,922 followers on Instagram summing up to 2,091 (at the time of writing this review) followers. You can also see on Twitter that the account was created in January 2019 so how come they’ve been in business for 10 years.

You can follow their social links yourself to verify.

These testimonies never change. The contents are exactly the same as the names of the testifiers. I don’t think you can ever find them anywhere to ask about their success.

Exactly the same testimonials were used for their previous domain names which point out that, they’re fake. Just compare them yourself. 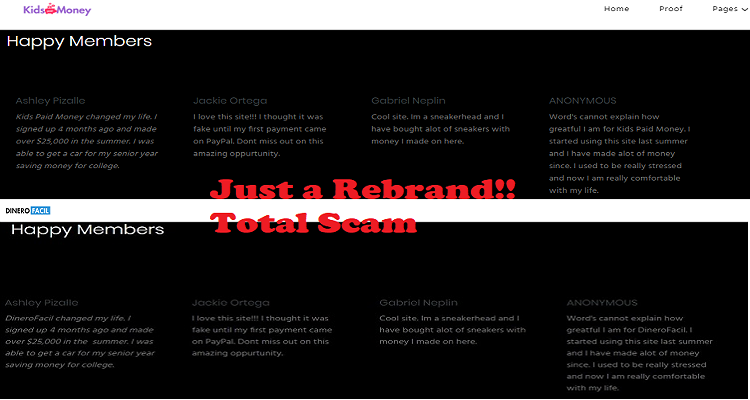 They have manufactured them as evidence to their legitimacy. Ironically, they’re doing what scammers do to sell you into their false promises. They’re not real so don’t take them seriously.

One might argue that Clout Bucks hasn’t been in the system for long so what proof do I have to label it a dangerous site to share your information on. Well, we can make an inference from their previous domain name: kidsearncash.com.

According to BBB investigation results, kidsearncash.com which now redirects to cloutbucks.com is rated B-. They reported that Kids Earn Cash is not legally registered in Canada and there’s no physical location based on their address.

In trying to reach them to verify their claims, the email of BBB wasn’t delivered implying no recipient. They, however, found out that Kids Earn Cash was related to Kids Earn Money LLC of which users have lodged bitter complaints against them.

Would this be different………

In my opinion, it’s not worth joining for you put yourself at risk sharing your personal information on the platform. Check out the full report on Kids Earn Cash here.

Outrightly, Clout Bucks is no legit and all the facts I’ve provided so far points out that it’s no better than a scam. Reasoning from their payout rates and history of operations is so strong to ignore.

In my opinion, the website is not worth joining and you’ll put yourself at risk if you use personal information such as email, bank details, PayPal and social media information. Not only will you be spammed will mails but there’s the likelihood of hack.

You would ask; why the heck are they going through all the hassle flipping domain names to drive traffic to their site? That’s a good question but I’m afraid I might not have a concrete answer for you.

In my honest opinion, the obvious thing is money. As stated on their site, they get paid on ads from their partners. Also, all those offers that send you to 3rd party websites possibly have affiliate links which rake in money for them.

The other probable thing is data collection. This is a risky thing if you let yourself off guard. Remember, some of the offers you find on the dashboard would ask of your phone number and other details.

You’re likely to be spammed with all sort of things. So if you’ve signed up with the information you share with your bank account, PayPal and other relevant things, you might want to change. You can be hacked.

Are you going to take the words of this dishonest website? If they’ve provided false information for people to believe in their delusion, do you think they will pay you? What else wouldn’t they do with your information?

In my opinion, Clout Bucks is riskier than you think. Instead of being caught up with their shiny offers, I will suggest you spend time on Respondent to make a significant income.

In summary, here are things to note;

It’s Painful To Waste Your Precious Time, Here’s How I Make Money!

You don’t have to risk your personal information and precious time chasing after empty promises. I’ve also been on this road before until I found the right way to make money with my laptop.

Check out my #1 recommendation for creating multiple streams of income with the internet passively. The guide is no brainer to follow and provides you with all that you need to know and how to start especially if you’re a newbie.

I’ve helped several people with this recommendation and you can start yours right away if you’re willing to work it out.

Do you any experience or thoughts concerning Clout Bucks? Share it in the comment box below and I will be glad to connect with you as soon as possible.

Until then, I hope you make a good decision.

4 thoughts on “Clout Bucks Review: A Scam To Watch Out! [Honest Warning]”

Table of Contents
What Is Clout Bucks About?
How Clout Bucks Really works?
The Ugly Truth of Clout Bucks Unveiled!
#1. Undisclosed Founder
#2. Unrealistic Earning Rates
#3. Clout Bucks Existed With a Different Domain Name
#4. No Payment Proof – They Never Pay!
#5. False Site Statistics
#6. Fake Testimonials
What Clout Bucks Is Likely To Be (BBB Report On KidsEarnCash.com)
Is Clout Bucks Scam Or Legit?
What At All Is Their Motive? Data Harvesting, I Guess......
Conclusion: Your Take Home Option!
Pros
Cons
It’s Painful To Waste Your Precious Time, Here’s How I Make Money!
Over To You!!
Share it, if you like it! 🙂